3 Korean Beauty Youtubers you should also pay attention to

Not just Pony, there are some other Beauty Youtubers you should also be paying attention to/ subscribing. Don’t get me wrong, I personally like Pony a lot as well, especially she has a really cute personality. But there are also more beauty Youtubers that might be as awesome as Pony.

No.3 Kimdax
I discovered her when her Cheese In the trap Baek In Ho cover makeup popped up on my recommendation list. I was very impressed by her skills, she doesn’t use a lot of high- end makeup, very down to earth and her video editing is very on point as well. Kimdax has many other cover makeup videos, from fictional characters to celebrities ! Be sure to go check her out ~ 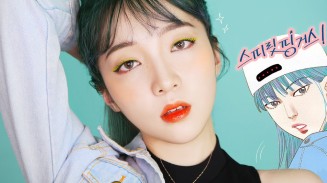 No.2 CHES
If you want to change your makeup for tomorrow’s gathering with your friends, just open Youtube and go to CHES’s channel, she has a lot of makeup tutorial on different makeup style, you can wear them daily, probably even seven makeup looks in a week. Most of the products she uses are from Korean’s local cosmetic brands, like The Seam, Innisfree, Missha, you can just have access to them easily if you are living in Asia, but if you are not in Asia, don’t worry, these products also have a lot of alternatives, to be honest, you can actually find other dupes in your local drug store. She also has her video subtitled, making things easier for those who doesn’t understand Korean !

No.1 Ssin
You might have heard of her, she went to Get it beauty, also film a promotion video for Moonshot with Sandara Park and a good friend of Hong Kong’s Beauty Youtuber, Ricky KAZAF. Given the fact that she is a very well known Youtuber, she is very honest, when I say very honest, not only she tells you which videos are sponsored and which aren’t, she is also not afraid of saying “this product is just a no no”. No matter they are given by the brands for free or she bought them herself so that she can do a one brand video or test out new products. She tells the truth, what she thinks about each product. Other than being extremely honest, she can also transform herself into anyone she wants easily, from a girl to a guy, a guy to a girl. Just impressive. Bonus for watching her videos, she is funny af, although she speaks in Korean, she has most of her video translated, so international viewers don’t have to worry about not understanding a word !